World-Leading Creatives Head to The National Festival of Making Talks 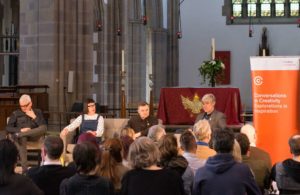 Some of the most recognisable names in fashion, design and art will sit alongside the British creative, arts and manufacturing industries’ brave, new innovators in a series of FREE talks and panel discussions at The National Festival of Making on Fri 14 – Sun 16 June 2019, organised by Creative Lancashire and open to all.

The Talks provide a rare opportunity for anyone to learn more about the making industries in their most diverse forms and guests already announced include critically-acclaimed ceramicist, Halima Cassell and profoundly influential, ‘new wave’ designer and creator of record sleeves by Buzzcocks and Duran Duran, Malcolm Garrett, fashion entrepreneur, Patrick Grant and founder of schools learning programme, Fixperts, Daniel Charny. Bringing highly specialist perspectives from distinct creative and industry backgrounds, the festival also welcomes Philippa Glover of Liverpool-based advanced robotics company, CNC Robotics, Darren Henley, Chief Executive of Arts Council England, Andria Zafirakou from creativity-in-schools initiative, Artists in Residence, Co-founder of The National Festival of Making, Wayne Hemingway and Chief Executive of Manchester International Festival, Christine Cort and many more. Creatives and makers will also have the opportunity to gain business support and advice by pre-booking a slot for one of the Maker Development Surgery Sessions during the festival weekend.

Full information about the festival’s Talks programme is available at www.festivalofmaking.co.uk with further announcements on sessions and speakers still to come. Connect with the festival on social media at: