Over 100 women and girls from across Blackburn with Darwen came together at Blackburn Youth Zone to take part in the event celebrating women empowerment, entrepreneurship and heritage. The inspirational day was organised and hosted by Blackburn Youth Zones Strong Sisters group, made up of 8 girls aged between 11-19; all of which are taking part in the year long strong sisters project.

The 12-month project which is funded by the National Lottery Heritage Fund  sees the girls exploring Blackburn’s rich history of influential women. The Strong Sisters project is engaging members of Blackburn Youth Zone’s Girls Group who are researching the strong and rich heritage of women from Blackburn with Darwen and further afield with the aim of inspiring them to follow their own dreams and ambitions.

As part of the event the girls exhibited the research work they have done into key events throughout history such as the Suffragette movement, establishment of the Lancashire Women’s Centre and women in Parliament, including Barbara Castle who was until recently, the longest-serving female MP between 1945 and 1979.

Kate Hollern, Blackburn with Darwen MP who gave an inspirational speech on the day said:

“I was honoured to attend and speak at Blackburn Youth Zone’s, Strong Sisters Event, that took place on Sunday 30th June.

I was taken aback by the work and achievements of the inspiring group of young, local females, that have worked so hard to complete this first stage of their project.  I would like to take the opportunity to thank the amazing group of young females that make up the Strong Sisters for inviting me to take part in their event, and congratulate them on a very successful, empowering, informative and fun event. Well done girls!”

The Strong Sisters project runs weekly on a Sunday 1:30-3:30 at Blackburn youth zone. For more information email enquiries@blackburnyz.org or 01254 292000. 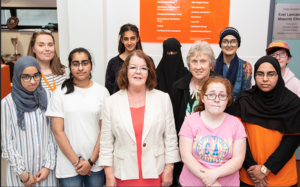