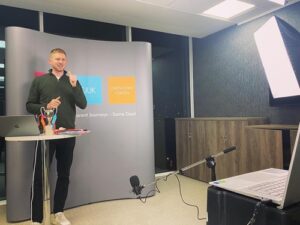 The family business which celebrated its 30th birthday last year, didn’t want to let the challenges presented by COVID-19 stand in the way of raising vital funds for the Youth Zone. The quiz, which is usually held at the Dunkenhalgh Hotel, was hosted virtually again this year due to uncertainty around whether a large scale event would need to be cancelled last minute.

40 teams made up of Lancashire businesses came together from across the country to raise over £6,000 for Blackburn Youth Zone.

Forbes Solicitors defended their title as Champions for the second year in a row, closely followed by Haydock Finance in second place and Sales Geek in third.

Richard Slater of Lancashire Business View made a guest appearance on the night and invited Blackburn BID along to promote their campaign to get Blackburn to City status.

Commenting on a successful evening, Cummins Mellor chairman Richard Mellor said: “As with every year, we take our role as a Patron for Blackburn Youth Zone seriously and with pride. After the past 18 months, we felt it was important to be safe and practical but still support and raise money for our local community. We went ahead with another virtual quiz, but we hope to be back in person again next year!

“The team and I would like to extend our thanks to the teams that signed up for the quiz this year, as well as everyone who purchased raffle tickets, and of course to all the people who generously donated the prizes on the night. Thanks to all of these people, the event was once again a roaring success.”

Blackburn Youth Zone is a 21st century youth hub located at the heart of Blackburn, open 7 days a week to young people aged 5 to 25 years old, aiming to change the prospects offered to young people in the area.