A group of Blackburn Youth Zone members hosted a spectacular evening of cultural entertainment this week. The evening which consisted of a range of entertainment, food and speeches from the young people was attended by over 60 members of the community.

As part of the Youth Narrative and Strong Sisters Projects that are running this year at BYZ the young people involved took this opportunity to exhibit the research they have been doing as well as talking about personal experiences they have had throughout the project.

Throughout the evening the group led critical conversations around integration and cohesion which were captured on film. This will go towards the final part of the project where a short film will be released showing the journey they young people have been on and their findings from the last 12 months. 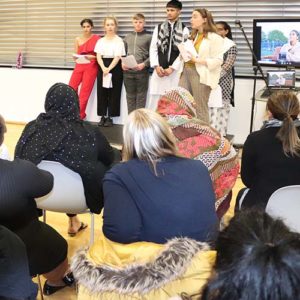