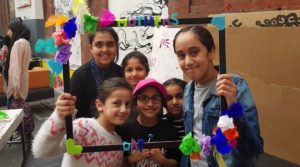 Blackburn Youth Zone has received a National Lottery Heritage Fund grant of £29,200 for a 12-month project exploring Blackburn’s rich history of influential women. Made possible by money raised by National Lottery players, the Strong Sisters project will engage members of Blackburn Youth Zone’s Girls Group in researching the strong and rich heritage of women from Blackburn with Darwen and further afield with the aim of inspiring them to follow their own dreams and ambitions.

They will look at how women have played key roles in events throughout history such as the Suffragette movement, establishment of the Lancashire Women’s Centre and women in Parliament, including Barbara Castle who was until recently, the longest-serving female MP between 1945 and 1979.

The project, which will run throughout 2019, will see also see young people visit the People’s History Museum in Manchester and the Houses of Parliament in London.

The girls will deliver various exhibitions throughout the project both at Blackburn Youth Zone and Blackburn Museum, which will be open to the general public.

Blackburn Youth Zone exists to create a more positive future for young people in Blackburn with Darwen, promoting cohesion, skills, aspirations, health and wellbeing. We have a growing membership of over 3,000 young people aged 8-19 (up to 25 with disabilities) and receive 900+ weekly visits. Since opening in 2012, we have profoundly changed the lives of 10,000+ young members through positive, enriching activities they can access in their leisure time.

Commenting on the award, Raz Mohammed, Blackburn Youth Zone CEO stated: “Blackburn Youth Zone is delighted to receive this funding from the Heritage Lottery Fund, which will support us to raise the aspirations of our female members by engaging them in the rich heritage of successful women from Blackburn with Darwen. We wish to thank the National Lottery players and look forward to delivering the project in 2019.”

“We are delighted to support such an inspirational project. It has sparked a real interest from the young people in exploring their heritage. They will not only become more knowledgeable about their past but will learn new skills which will help equip them for the future.”

Blackburn Youth Zone’s aim is to create a positive future for young people of Blackburn with Darwen, promoting cohesion, skills and aspirations, and health and wellbeing. We have a growing membership of over 3,000 young people, aged 8-19 (up to 25 with disabilities) and receive over 900 visits each week.

Our vision is to be at the heart of the community, collaborating to create a more cohesive and prosperous Blackburn and Darwen.

About The National Lottery Heritage Fund

Using money raised by the National Lottery, we Inspire, lead and resource the UK’s heritage to create positive and lasting change for people and communities, now and in the future. www.heritagefund.org.uk.