“We’re really proud of what the Youth Ambassadors project achieved in its first year, involving over 230 young people in this innovative approach to social integration. Many of the young people who took part gained the confidence and skills to take a lead in projects to make things better in their local areas. Rebecca Ramsay, Blackburn with Darwen’s Interim Head of Prevention & Neighbourhoods

The Youth Ambassadors project has been funded through Blackburn with Darwen’s Our Community, Our Future social integration programme. It aims to provide young people with the opportunity to become more involved in their community through social action and team building, and working with other people their age from different parts of the borough and different backgrounds.

The Youth Ambassador programme is for local 12 to 16 year olds. Blackburn with Darwen is made up of people from a whole range of different backgrounds, and this project will bring variety, culture and character to the Borough through the voice of young people.

The Youth Ambassadors project is in its second year and is being delivered by a broad range of partners from across the borough bringing together a range of skills, knowledge and expertise. The partners are; Blackburn Youth Zone, Blackburn Rovers Community Trust, BwD Young People’s Services, Healthy Living, IMO, One Voice Blackburn and Youth Action.

The programme will bring young people representative of the Borough’s population together and equip them with the information, inspiration, practical advice and guidance they need to tackle challenges they see around them. They will showcase their talent, leadership, and resilience, and alert others to their abilities and ideas to make a difference through social action. 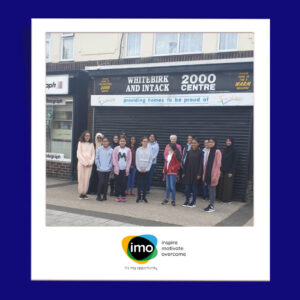 It’s been a really tough year! We’ve had to deal with so many ‘lock-downs’; I’ve felt isolated, lonely and really struggled to deal with more emotions. I heard about the Youth Ambassador project and thought this would be a great opportunity to get out of my house and talk to new people.

I really enjoyed the sessions with IMO, I made lots of new friends who I probably would never have met before. The team at IMO delivered lots of team building exercises and ice-breaking activities, this really helped bring the group together.

Youth Ambassador’s gave me the opportunity to take part and try new things.

During one session we went on a walk around the Whitebirk community. I learnt so much about our town, I would never have known if it wasn’t for the Youth Ambassador project.  The facilities that are on offer across the community are really good! I will be checking out Accrington Road Community Centre when it’s fully open to the public.

My name is Millie May, I’m 15 years old and I’ve just completed the Youth Ambassador project.

I found out about this project because of conversations with the ‘Young People Service’ in town. It sounded great, an opportunity to make new friends and learn new things about our community. Don’t get me wrong I was slightly worried because I do suffer from anxiety however, I pushed myself out of my comfort zone and still signed up. Illyas and Charlie who ran the project were really supportive and helped put me at ease instantly. Charlie was right…I made lots of new friends and I know we will all keep in touch now the project is over.

I honestly didn’t believe I would learn as much as I did about the community we live in. Our trip to Darwen was one of my favourite things about the project. Did you know we’ve famous landmarks that are on our doorsteps which have been here since the 1900’s!? Some of these are only 10 minutes away from my house! I would never have known the history behind the landmarks if it wasn’t for this project.

I’ve developed a new proud passion for my community because of Youth Ambassadors.

Another highlight for me was participating in a conversation, which turned into a healthy debate around our locality and how unsafe we (girls) feel about being out at night. I would never usually get involved with conversations like this, because I would worry if people would think about my opinions. But, Ilyas and the team were really supportive and everyone’s opinions were listened to and respected.

I know I do suffer with anxiety but the Youth Ambassador project has given me confidence that I would never have imagined.

I’ve gained skills which will help me develop in life but also I feel proud to say I feel confident in challenging myself when I must, and this is something I do not think I would have done before.

If given the opportunity, I would like to do the youth ambassadors programme again as I really enjoyed being involved in the Ambassadors Youth programme. I would recommend the programme to everyone.

One Voice Blackburn and McNally’s Music Tuition are part of the Youth Ambassadors 2021, which has been funded through Blackburn with Darwen’s Our Community, Our Future social integration programme.

The programme will bring young people representative of the Borough’s population together and equip them with the information, inspiration, practical advice and guidance they need to tackle challenges they see around them. They will showcase their talent, leadership, and resilience, and alert others to their abilities and ideas to make a difference through social action.

One Voice and MMT have worked together on a range of projects since 2017, including efforts to encourage members of socially isolated communities into music learning. The One Voice group BANNED, run by their girl’s group WEGs have been featured on BBC Newsround, as well a host of regional media.

In the most recent assignment the young people, aged between 11 and 16, have been working together since May. They have created their own pop group, BANNED Cohesion, and have been busy preparing for a live performance in late summer.

“Cohesion is a major part of One Voice’s work in the community. We are also running another integration project through Youth Ambassadors where we will use drama as a method of getting young people from different communities working together to make long lasting friendships.”

The Youth Ambassadors programme is led by Blackburn Youth Zone.

For more information about the project please call 01254 292000 or email enquiries@blackburnyz.org